Introducing my “Power” project and making a plea.

I’ve been quiet here on social media lately and for that I apologize. I am still shooting but now I’m shooting for two reasons which has taken up the majority of my free time.

I’m still continuing my commercial work, don’t worry about that. As a matter of fact I will be updating this place with new images from recent sessions with Severine Bertrat and Jessica Magary – both familiar faces here. I will also be introducing you to Elizabeth as she literally dips her toes into the world of modeling. Stay tuned for those images.

The past few weeks I’ve also been working on a separate project, one that I’m calling “Power”. This projects is about women with what some would consider “non-typical” roles/skills for their gender. Once you get passed that pre-conceived notion, however, you quickly learn that these roles/skills come about from specific events in their past or needs that they fulfill. The overall theme, though, is that these roles/skills empower them in unique ways and make them stronger. 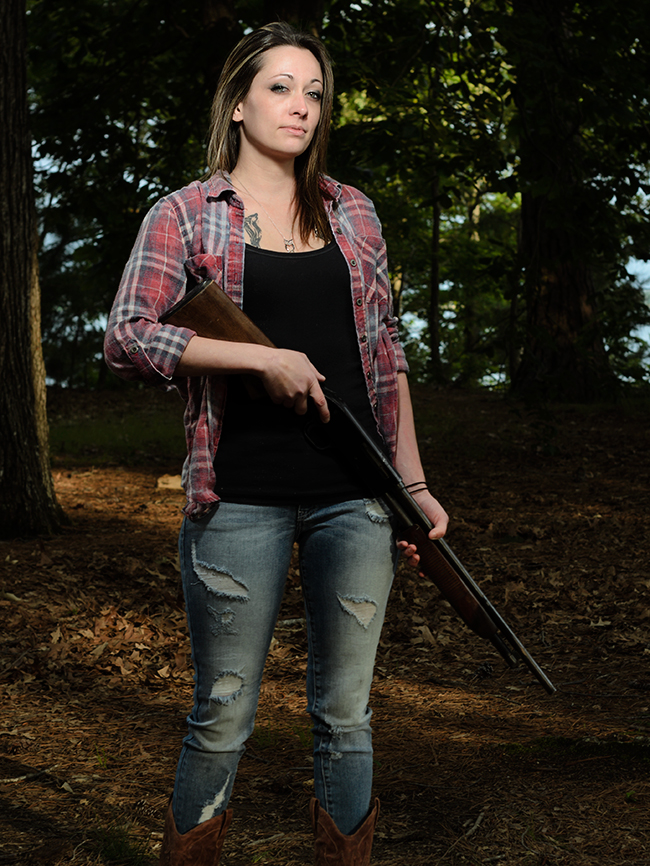 These sessions are not my standard “beauty/glamour” sessions. There isn’t a team of hair and make-up making them look pretty. They will not be posed in standard “cheesecake” poses and asked to make a pouty face. They show up to these sessions exactly how they would if they were doing their thing. Then I get pictures of them doing exactly that.

These are not models standing in front of cars all done up and posing seductively. These are women that work on their own cars, doing exactly that. Hair up, grease and oil on their hands, working on something that needs to be fixed. There will not be images of a woman in an evening gown standing in a field of goats. This woman will be in jeans and a t-shirt, feeding the goats, trimming their nails, and such.

I’m including some images from recent sessions to give you an idea of what I’m looking for. I do this for a reason. I want to find more women like this, doing their thing, showing the world that this is what they do and they are empowered doing it. There is no age limit, there is no “look” that I’m looking for. I want real women doing real things and telling their story of why.

Each person I work with will be asked to respond to two questions in written form. 1. What got you into doing whatever it is that we are capturing? 2. How does it empower you?

Some people I’m specifically looking for include a stay at home mom, a carpenter, a welder, a steelworker, a survivor of an abusive relationship, a person that has transitioned into a woman, an engineer, a doctor, a pilot, a women’s motorcycle gang, someone working as a “cam girl”, a female film producer, and such.

That isn’t to say that I’m not open to someone else. My door is wide open to any possibilities. I want to hear from anyone that has what some would consider an unusual talent/job for a woman that empowers them. Help me learn by showing me more possibilities.

Just because one aspect hasn’t been covered doesn’t mean I’m closed to the idea of working with someone else with the same talent/avocation/hobby. I’ve worked with two women so far that own and use guns, for example. I’m certainly open to working with more. Hell, there has been such a strong response to that avenue that I will be doing a whole project just on that group.

This is just the start as I plan on working on several projects in the coming months and years.

So, please contact me at mknopp1@cox.net or drop me a line on my Facebook page if you think you have something interesting to add. Maybe you know someone that fits the bill. I’m looking to wrap up this project in the next 2 months and have no problem traveling if its something wonderful. Last week alone I was in Williamsburg one day, Richmond the next, and Newport News on the third day.

Mark Knopp is a Virginia Beach-based portrait photographer covering the Hampton roads community. Contact him today at mknopp1@cox.net for you photographic needs.